Hit enter to search or ESC to close
Category

Maritime law enforcment agencies from the Association of Southeast Asian Nations (ASEAN) should enhance their collaboration to win the fight against transnational crimes at sea and preserve the stability in the region. Adm. Artemio Abu (third from left), Commandant of the Philippine Coast Guard, links arms with his counterparts from …

2022 will soon turn the corner

We will soon bid farewell to 2022 and usher in 2023. What lies ahead remains cloudy but looking back is 20/20 vision. 2022 had a rocky start with a tsunami of Omicron cases washing over the country. It inundated the health care system again but, thankfully, this was a less …

After five years! “After a 5 year engagement, we finally got hitched,” posted Alyssa Loyzaga Gibbs, who is now married to Anton Cruz. They got married last Nov. 27, 2022, Sunday, at The Palm House in Australia. Posting the same almost the same photos, Anton Cruz’ captions include, “Finally got …

Help Cong Cheeno guess what his dad’s request is

Platinum Karaoke capped an amazing run in the Leg 4 playoffs of the PBA 3×3 by winning its first ever championship Sunday, Nov. 27, at Robinsons Place in Malabon.

PRESIDENT Ferdinand R. Marcos, Jr. is hoping the Court of Appeals (CA) will reconsider its decision temporarily suspending the implementation of an SMC Global Power Holdings Corp. subsidiary’s power supply agreement (PSA) with Manila Electric Co. (Meralco), warning this may result in higher electricity rates.
At the same time, Meralco said it is exploring options after the CA granted a temporary restraining order (TRO) sought by SMC Global Power to halt the implementation of unit South Premiere Power Corp.’s (SPPC) PSA with Meralco. The TRO will be effective for 60 days.
Mr. Marcos on Sunday described the CA’s decision as “unfortunate.”
“(The decision) will cause further dislocations and possible price increase for power. We hope that the CA will reconsider. And include in their deliberations the extremely deleterious effect this will have on power prices for ordinary Filipinos,” he said in a statement released by the Office of the Press Secretary.
Meralco Chairman Manuel V. Pangilinan said that the power distributor will now seek guidance from the Energy Regulatory Commission (ERC) regarding its next step.
“I believe they (Meralco) have to talk to the ERC and get guidance from them. We have not heard, as far as I know, from San Miguel on what their next steps are going to be. I think the best is to consult the government,” Mr. Pangilinan said in a chance interview on Friday.
To recall, SMC Global Power’s petition stemmed from the ERC’s denial of its joint petition with Meralco, the buyer and distributor of its electricity, for a temporary rate hike.
In August, SMC Global Power announced that it sought temporary relief from the ERC to recover part of P15 billion in losses suffered by its units SPPC and San Miguel Energy Corp. (SMEC), the administrators of the natural gas-fired power plant in Ilijan, Batangas, and the coal power plant in Sual, Pangasinan, respectively.
However, the ERC rejected the petition, saying there was no basis and that the PSA is a fixed-rate contract.
Jose Ronald V. Valles, Meralco’s first vice-president and head of its regulatory management, said the company is following up its request with the Department of Energy (DoE) for an exemption from competitive selection process (CSP) of some emergency PSAs.
In a Viber message, Mr. Valles said the emergency PSAs are “ready to be implemented to shield our customers against volatile and potentially higher WESM (Wholesale Electricity Spot Market) prices.”
ERC Chairperson and Chief Executive Officer Monalisa C. Dimalanta said on Friday that the CA decision could lead to an increase in the monthly power bills of Meralco customers as the PSAs “have been shielding Meralco consumers for the past several months from the volatility of prices from WESM and automatic fuel pass-through PSAs.”
She expressed “grave concern on the instantaneous effect” of the TRO on the supply agreements, warning that it may expose about 7.5 million Meralco customers in Metro Manila and nearby provinces to higher electricity prices as the fixed rates in the current PSAs are no longer implemented.
Terry L. Ridon, convenor of think tank InfraWatch PH, said in an e-mail on Friday that the TRO will pave way for discussions on “fair and reasonable rates” in Meralco’s franchise area.
“This provides a way forward towards a determination on whether the price proposal in the joint petition constitutes as the least cost to consumers in comparison to other prospective proposals extraneous to the current power supply agreement, such as prices through emergency procurement or the spot market,” Mr. Ridon said.
Meanwhile, Maria Ela L. Atienza, a political science professor at the University of the Philippines, said Mr. Marcos should refrain from making statements that may influence the Judiciary.
“If he respects the separation of powers principle and the independence of the Judiciary, he should not make these kinds of statements. He can just consult his legal adviser or the Solicitor General if there are allowable actions within the legal processes that the Executive branch can do regarding the issue,” Ms. Atienza said via Viber.
Meralco’s controlling stakeholder, Beacon Electric Asset Holdings, Inc., is partly owned by PLDT, Inc. Hastings Holdings, Inc., a unit of PLDT Beneficial Trust Fund subsidiary MediaQuest Holdings, Inc., has an interest in BusinessWorld through the Philippine Star Group, which it controls. — Kyle Aristophere T. Atienza and Ashley Erika O. Jose

THE PHILIPPINES’ debt-to-gross domestic product (GDP) ratio is expected to drop to around 50% by 2028 if it sustains its strong economic growth, Finance Secretary Benjamin E. Diokno said.
“The debt-to-GDP ratio was below 40% before the pandemic, and went up to 62% this year as revenues fell while pandemic-related pending rose. With sustained, strong growth, expect the debt ratio to fall to about 50% by 2028,” Mr. Diokno told reporters in a Viber message last week.
The National Government’s outstanding debt as a share of GDP rose to 63.7% at the end of September — the highest in 17 years. The latest debt-to-GDP ratio was higher than the 63.5% in the first quarter and 61.2% logged in the second quarter.
It also remains above the 60% threshold considered manageable by multilateral lenders for developing economies.
“While the absolute level of debt may increase, the economy’s ability to pay also increases from the economic gains and investments it pursued, including where the debt is used for. As long as the economy grows faster than the growth of public debt then the level of debt becomes sustainable,” Mr. Diokno said.
Economic managers earlier said the goal is to bring down the debt-to-GDP ratio to 61.8% by yearend, all the way to 52.5% by 2028.
The Philippine economy expanded by an average 7.7% in the first nine months of 2022. In order to achieve the government’s 6.5-7.5% full-year target, the economy would only need to grow by 3.3-6.9% in the fourth quarter.
“What matters is the sustainability of debt, which depends on two things: the cost and the ability to pay it off,” Mr. Diokno said.
“On the cost, the government’s prudent strategy over the years, which was expressed in the country’s strong credit ratings amid a sea of downgrades globally during the pandemic, enabled the government to meet its financing needs at the lowest possible cost, consistent with a prudent degree of risk.”
Earlier this month, S&P Global Ratings affirmed the Philippines’ “BBB+” investment grade rating with a “stable” outlook. The “BBB+” sovereign rating is a notch away from the “A”-level grade targeted by the government.
S&P said the Philippines may face difficulty in restoring the fiscal and debt settings to pre-pandemic levels in the next 12 months to two years, due to rising inflation, tightening monetary policies and supply chain disruptions.
However, S&P cautioned that a downgrade is possible if the Philippines’ recovery falters, which leads to a “significant erosion” of the long-term growth trend.
“Indications of downward pressure on the ratings would be a sustained annual change in the net general government debt that is higher than 4% of GDP and the general government net debt stock exceeding 60% of GDP, or interest payments exceeding 15% of revenue on a sustained basis,” it said.
In September, Moody’s Investors Service also affirmed the country’s long-term local and foreign currency issuer and senior unsecured ratings at “Baa2” with a “stable” outlook.
Mr. Diokno also noted that the government needs to actively manage foreign exchange risk, liquify risk and interest rate risk when borrowing.
“Debt in foreign currency has lower interest rates. But the peso equivalent of debt service may rise when the peso depreciates. The borrowing mix is the main policy tool to reduce the foreign currency risk exposure of the debt, wherein the government targets a mix that is heavily skewed towards local financing,” he said.
The government plans to borrow P2.47 trillion this year, with 75% of expected to come from domestic sources. — Luisa Maria Jacinta C. Jocson 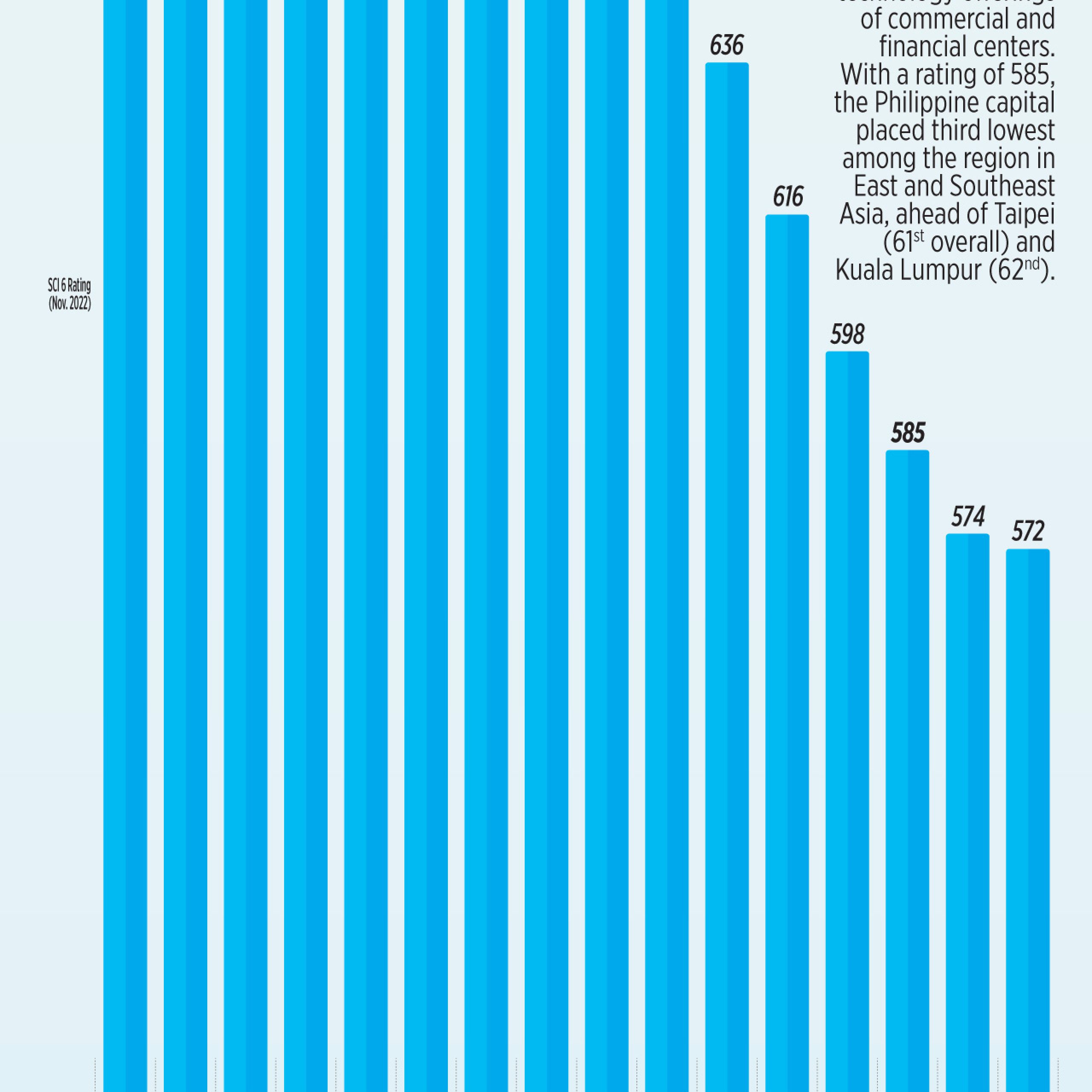 Manila rose six spots to 55th place out of 75 ranked centers in the sixth edition of the Smart Centers Index (SCI) by Long Finance Initiative. The index rates the innovation and technology offerings of commercial and ﬁnancial centers. With a rating of 585, the Philippine capital placed third lowest among the region in East and Southeast Asia, ahead of Taipei (61st overall) and Kuala Lumpur (62nd).