On March 26, President Duterte finally signed the second of the four major packages of comprehensive tax reforms proposed by the Department of Finance. The Republic Act 11534 or the Corporate Recovery and Tax Incentives for Enterprises (CREATE) Act will bring the country’s business climate competitiveness at least at par with the neighboring ASEAN countries, and attract more greenfield and expansionary investments from foreign and domestic investors.

The CREATE Law’s two-pronged reform will a) simplify tax regulations and immediately reduce the country’s corporate income tax from 30% to 20% for micro, small, medium enterprises (MSMEs), and 25% for other corporate taxpayers, and b) provide merit-based and time-bounded incentives for domestic and export-oriented enterprises. 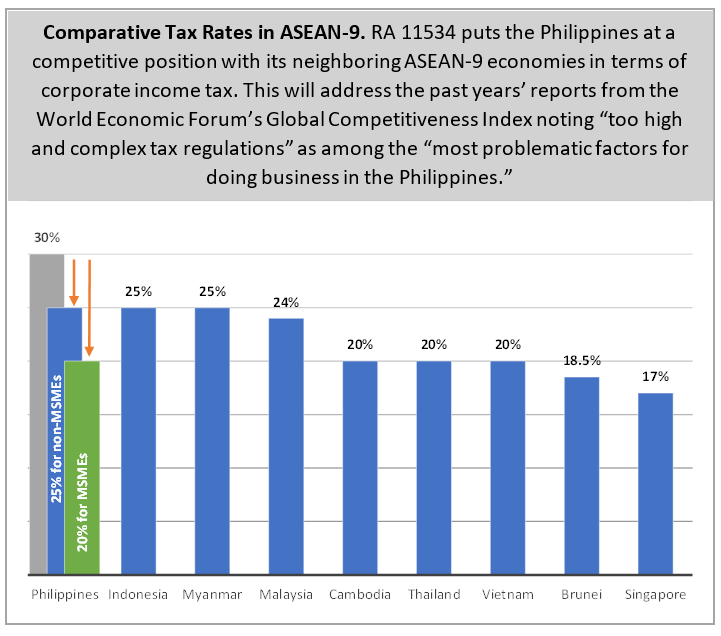 President Duterte, however, vetoed nine provisions in the bicameral version of CREATE, which are thought to go against the principle of the reform. These are as follows:

The enactment of RA 11534 comes at a time when the business community is anticipating forward-looking regulatory measures from the government to facilitate investment recovery from the severe blow of the pandemic, which has been taking its toll on many industries since March 2020. In fact, the Philippines has notoriously been recognized as having the longest stretch of government-imposed lockdowns. Furthermore, these lockdowns were implemented at different levels of restrictiveness, making it the longest transition period towards the next normal of business operations.

Analogous to the reports of COVID-19 virus strain mutations, the CREATE Law is the concluding “mutation” of the Tax Reform for Acceleration and Inclusion (TRAIN) 2 proposed by the Department of Finance to complement the first package of the tax reform. [Recall that in December 2017, the TRAIN 1 Law was enacted by President Duterte. The first package cut a hefty income tax for the majority of Filipino taxpayers.]

When TRAIN 2 was filed in the House of Representative in 2018, it was named Tax Reform for Attracting Better and High-Quality Opportunities or simply, the TRABAHO bill. Its major intent was to gradually lower the corporate income tax rate by 2% annually until reaching 20% in 5 years, and to align incentives and repeal some perpetual incentives granted by the Philippine Economic Zone Authority (PEZA). The version did not hurdle in the House of Representatives because of complexity.

Following the TRABAHO bill was the Corporate Income Tax and Incentives Rationalization Act (CITIRA) Bill filed in 2019. Taking majority of its provisions from the TRABAHO bill version, the CITIRA bill simplified and expanded corporate incentives, and changed the gradual reduction of corporate income tax from TRABAHO bill’s 2% annual reduction to 1% until reaching 20% in 10 years, lengthening the transition towards the proposed 20% corporate income tax regime. It also emphasized an increase in the penalties and imprisonment period for specific violations of the Tax Code. This, too, failed to pass the House of Representative for complexity and overemphasizing penalties rather than incentives.

In 2020, the COVID-19 pandemic started infesting the Philippines. It severely damaged many industries and the MSME sector, and badly contracted the economy by -9.5% in 2020 (full year). The pandemic caught the Philippine government off-guard, aggravated with reports of the Duterte Administration downplaying the impacts of the virus to the economy. As a result, the promising 5%-6% economic trajectory of the Philippines was quickly dumped to the lowest rank of GDP growth among the ASEAN-6 economies. 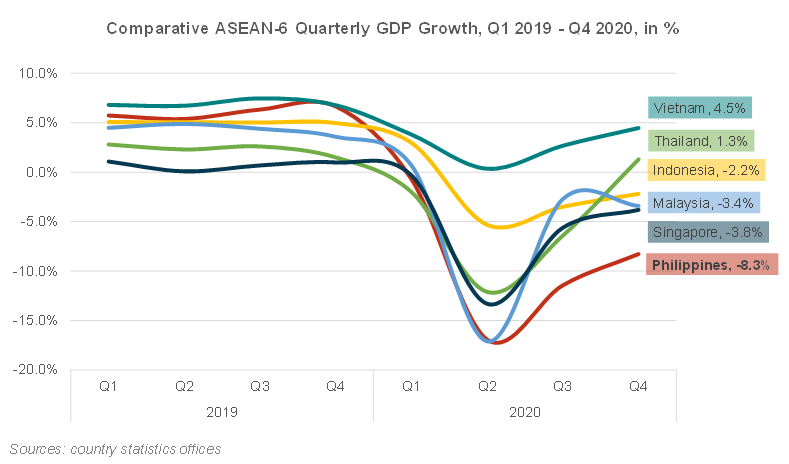 Several industry associations and chambers of commerce have already expressed concerns to the President over the drastic effects of continued restrictions in the economy. In Q2 2020, the CREATE bill was filed and the President had then certified the bill as urgent to fast-track the facilitation of economic recovery from the impacts of the pandemic. Debate on the new version of the tax reform was already ongoing when the government started incremental opening of some sectors in H2 2020, and then eventually to almost 100% by the end of 2020. However, the industrial impact of the recession was already a heavy stake to pull out and to drive the economy back to the pre-pandemic level.

Confusing as it may had seemed to the public, these legislative “mutations” were more necessary rather than preferential to the sponsors of the bill. In fact, Article VI, Sec. 26 (1) of the 1897 Constitution provides that every bill passed by the Congress shall embrace only one subject which shall be expressed in the title thereof.

Notice that the title and subject of the first version of the legislative measure focused on creating more jobs by attracting more investment through tax reform. Subsequently, CITIRA then took a clearer subject of the proposed law to focus on income tax and incentives rationalization, which are vital to attracting businesses, and the penalties for non-compliance. The concluding version of CREATE included the term “recovery” in its title through reduced corporate income tax and a more favorable incentive regime for all enterprises. This development manifests the timely dynamics of forward-looking regulation that every job-creating industry anticipates in the country. If less band-aid solutions are enacted, more certainties in the economy will be created and may potentially attract more investments.

Staying true to the essence of attracting more investment while facilitating recovery in pandemic-hit sectors, the CREATE Law has been getting compliments from the investment promotion agencies, such as the PEZA and the Board of Investments, and the private sector in the earlier stage of the bill. Specifically, the largest association of semiconductors and electronics manufacturers in the country, SEIPI, have been actively expressing its views on the fine details of the reform.

Over almost a decade, the manufacturing sector has been among the top industries to consistently contribute to the foreign direct investments (FDI) in the country as recorded by the Bangko Sentral ng Pilipinas (BSP). In 2020 alone, the manufacturing industry managed to grow by 46% in realized FDI according to the BSP. Collectively, the semiconductor and electronics sector are also among the top export merchandise of the Philippines at 5% growth in export sales amounting to US$ 278.62 million during the pandemic-stricken year. With the enactment of the CREATE law, the manufacturing sector, particularly the semiconductor and electronics, should expect an upward trajectory in investments as the legislative development took out many uncertainties over tax breaks in this technology-intensive industry. The manufacturing industry also carries with it a number of promising support industries such as warehousing, logistics, and transportation, to name a few, that are more likely to spur from the increased manufacturing activities.

Furthermore, the real estate sector, being at the forefront for land and commercial space-based investments, is always among the first to see increased transactions, particularly in the heavy-industry sector. In fact, it can be considered as a pseudo-barometer for knowing which economic industries are taking the pressure from any calamity or crisis.

During the pandemic alone, the real estate’s industrial market segment appeared undisturbed and saw steady growth in the warehousing and storage sectors following the shift to online commercial activities by essential consumer products market, and food manufacturing and storage.

Moving forward, renewed opportunities brought about by the completion of new infrastructure developments in Central Luzon (from developers Ayala Land, Filinvest, and TECO Industrial Park) and the Cavite-Laguna-Batangas cluster (from Ayala Land and Megaworld Corp.) should be able to complement the investment opportunity from the newly enacted CREATE Law.

Consistently, Region III (Central Luzon: Bataan, Bulacan, Nueva Ecija, Pampanga, Tarlac, Zambales) and Region IV-A (Cavite-Laguna-Rizal-Batangas-Quezon) are also among the top regions with the most approved investment commitments from the 7 Investment Promotion Agencies (IPAs) tracked by the Philippine Statistics Authority. In 2020 alone, total committed investments surged by 410% (Php 614 billion) in Central Luzon, which will be realized in 3 to 5 years.