Angeles City, Pampanga is the I.T.-BPO location choice in Central Luzon, classified as a first-class, highly urbanized city and has a government independent of the province. The 6,027 land area, divided to its 33 barangays, is supported by good infrastructure including an international airport, accommodating hotels, and strong telecommunications infrastructure. Hence, it is known for its competence to host information and communication technology matters, particularly to call centers. Moreover, the total population of Pampanga Province-2,014,019, of which 16.20% (326,336) are Angeles City, contributed to its accomplishment as a next wave city and population annual take-up is set at 2%.

Figure 1: Population (2010 Census) of Angeles City vs. Next Wave Cities

Angeles City, Pampanga offers accumulative number of advantages in BPO market, for instance is its talent. As of school year 2012-2013 the city’s total number of graduates stand at 3,982. Further, for the same school year the rest of province’s graduates of 5,296 and professionals also provide additional talent supply to Angeles City. On top of that, the workforce population is also particularly high at 65.4% for 2013. Much of the traction is initiated by the fact that Pampanga is the Region III’s center province. Evidently, talent supply is not an issue for Angeles City.

Figure 2: Graduates 2013 of Angeles City vs. Next Wave Cities

The independent neighbor of Angeles, Clark Freeport Zone, has affected the labor standard of the city. Hence, skilled competent labor comes with a price; minimum wage rate is set at Php 336. Making it one of the highest rates compared to other next wave cities.

The province of Pampanga is relatively plane with one distinct mountain, Mount Arayat and the famous Pampanga River. Moreover, it is strategically located at the crossroads of Central Luzon and is highly accessible by both air and land. Angeles City, Pampanga is accessible in less than two hour drive by land though the North Luzon Expressway (NLEX), which extends from Metro Manila till the north end of Pampanga, or via Subic-Clark-Tarlac Expressway (SCTEx). Land travel is made easy by numerous bus routes existing, in addition, other available mode of transportation are PUV and jeepney.

On the other hand, Diosdado P. Macapagal International Airport in Clark served as opening of the province. There are 17 incoming flights daily. Various transportation infrastructure and developments have made Angeles City a promising investment destination.

Telephone services in the province are provide by DaTelcom Corp, Innove (Globe Telecom), DigiTel, PLDT, PT&T and RCPI. While mobile services are provided by Smart Communications, Globe Telecom and Sun Cellular. Meanwhile, Electric power is distributed by Angeles Electric Corporation (AEC), which also supply to small parts of Mabalacat, Bacolor, and Porac. As of 2013, the average power rate is at Php 8.30 per Kwh.

Figure 4: Power Rate 2014 of Angeles City vs. Next Wave Cities

Angeles City, Pampanga is gaining world fame as the entertainment capital of the Philippines. It distinguishes itself as one of the fastest-growing cities outside of Metro Manila. The establishment of a number of shopping malls also fuelled the city’s economy, including SM City Clark, Nepo Mall, and Robinsons Place Angeles, which serve as centers of commercial industry. Prompt to the boost of the economy, hotels such as, Fields Plaza Suites, Lewis Grand and Angeles Beach Club, embodied its bold and promising progress.

I.T. Parks Around the City

Due to the transformation of the old U.S. base into Clark Freeport Zone, the economy of Angeles City’s upturn development linger. From the city’s growing industrial and agricultural estate, to being designated as the Philippines’ future premier gateway. The continuous improvement of the city does not only attract tourists, rather it also attract investors. Business and I.T Parks grew rapidly as investors move toward in the city. 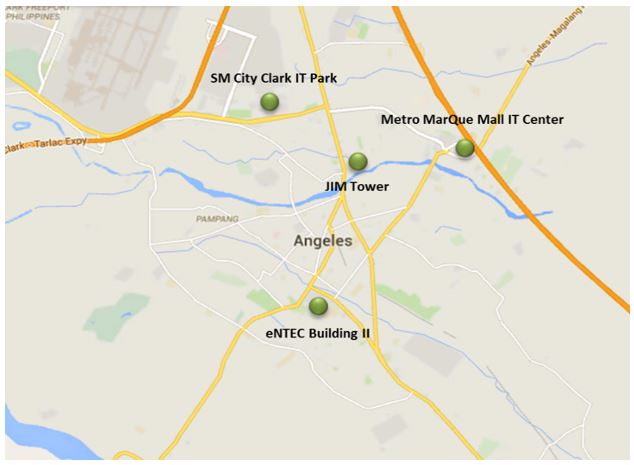 Taking the lead in the promotion of investments, the local government’s Investment Promotion Office concentrates in providing assistance and additional incentives to future investors. Aside from the tax exemption the operators can avail from PEZA, they also propose additional one year business tax exemption from the date of operation. Nonetheless, the office also provide non-fiscal support to investors. They offer assistance and security for business transactions. With the aid from IPO, processing of business permits will more likely take two to three weeks.

Aside from the low-cost talent and real estate rates in countryside compared to metro cities, such initiatives could help the province maintain its competitiveness.

Locators in the City

Angeles City is already equipped and has the talent to provide the same products and level of services that the main cities of Manila and Cebu currently offer. Sustained progress is pretty obvious in this city, were some multinational companies have established their operations and have appreciated good incentives in doing business.

Angeles City as an autonomous first class highly urbanized city in the province of Pampanga has transformed economically after 1991. From development of agricultural land to commercial land, it now also houses several industrial estates, IT and call center industries, a special economic zone and other major investments. Other than hastening the innovation of transportation and other infrastructure, the high level of standard that they are maintaining would pave way for the foundation of an ecosystem that accompaniments talent across the city. These assets prove that the city’s full capacity to host any locators in their vicinity.