Makati City Central Business District (CBD) is the country’s premier business and financial district, being home to one of two trading floors of the Philippine Stock Exchange for over 20 years, three of the Big Four accounting firms (PricewaterhouseCoopers-Isla Lipana, Ernst & Young-SGV & Co., and KPMG), the country’s largest banks, top multinational corporations, and 49 of the 67 foreign embassies holding office in the country.

Ayala Avenue, one of Makati’s main thoroughfares, and Paseo de Roxas were once the runways of the country’s first airport. The airport’s control tower, the Nielson Tower, has been preserved as a beloved Makati icon and has served various uses through the years, the latest of which is the Blackbird restaurant serving international cuisine.

Makati City is one of the most progressive cities in Metro Manila. It has a population of 629,616 (2020) and is rated as one of the most densely populated cities in the Philippines with  29,000 persons per square kilometer of permanent residents. Daytime population exceeds 1 million during weekdays. Makati’s talent pool come from all over the National Capital Region and its nearby provinces, such as Cavite, Laguna, Rizal and Bulacan. Graduates from NCR and nearby provinces totaled 193,807  in 2015.

Makati CBD is highly accessible for both private and public vehicles. Buses and jeepneys regularly traverse Ayala Avenue and Sen. Gil Puyat Avenue. The city has six exits to Epifanio de los Santos Avenue (EDSA), one exit to Skyway Stage 3, and four current (and three future) exits to the South Luzon Expressway (SLEX). There is also an additional access point via the Santa Monica-Lawton bridge which connects Lawton Ave. in Makati to Santa Monica Street in Kapitolyo, Pasig.

The CBD continuously expands. In 1998, Rockwell Land developed Rockwell Center, a high end district in the northern part of Makati, on the former site of the Rockwell Thermal Plant. Century Properties then built Century City nearby, in 2007. Two of the country’s tallest buildings are in Century City, Gramercy Residences (73 storeys) and Trump Tower Manila (57 storeys). And Ayala Land has a masterplan for the continuous development of Makati CBD.

Its “Make it Happen, Make It Makati” campaign creates distinctions among its six districts: McKinley Exchange, Ayala Center, Ayala Triangle Gardens, CityGate, Circuit Makati, and the upcoming intermodal transport facility currently being built on the site of the demolished Intercontinental Hotel. McKinley Exchange and CityGate will cater to the increasing demand for office space while Ayala Center, Ayala Triangle Gardens, and Circuit Makati will be known as hotspots for entertainment and leisure. The modern intermodal transport facility will become a new mixed-use development that will ultimately ease traffic and pedestrian flow in the EDSA-Ayala area by 2021.

There are also annual events in Makati like Art Fair, Art in the Park, Wanderland Music and Arts Festival, and Ayala Triangle Christmas “Festival of Lights” that has strengthened its bid to become the “Urban Tourism Capital” of the Philippines.

The presence of  many of the country’s five-star hotels like The Peninsula Manila, the Shangri-la Makati Hotel, New World Renaissance Hotel, Dusit Hotel,  alongside 18 hotels accredited by the Department of Tourism, provide more than 5,000 rooms. The new Mandarin Oriental is currently being built on its new site across where it used to be, and will reopen in 2020. Shopping centers like Greenbelt, Glorietta, and The Power Plant offer a mix of high-end retail shops, restaurants, service, leisure and entertainment.

Makati has always led in the supply of office spaces across the five CBDs. 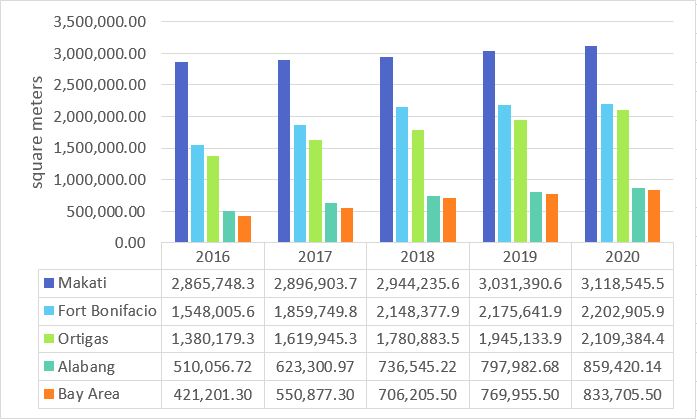 In comparison to other CBDs, Makati is still the largest office provider. The biggest companies and conglomerates in Makati include  Convergys Philippines, Teleperformance Philippines, Macquarie Group, PLDT, and Ayala Corporation. Noticeably, the online gaming industry has gained its spot as a major contributor of growth in the CBD, in terms of office takeup and employment opportunities.