Metro Cavite, composed of Bacoor City, Dasmarinas City, and Imus City, is a complete BPO ready package. Being one of the highly commercialized and one of the fastest developing provinces in the country for its close proximity to Metro Manila, Metro Cavite sets its mark as one of the next wave cities. The province is also known for its huge productive population of 4,344,829 (2020 census). According to the National Statistics Office (NSO) data in 2013, Cavite had the highest literacy rate among provinces in the Philippines with 99.6%. In addition, a total of 202 tertiary and vocational schools around the province provide abundant, highly skilled and educated workforce graduates annually.

Figure 1: Population (2010 census) of Metro Cavite vs. Next Wave Cities

Strong competitiveness of Metro Cavite towards other next wave cities is not surprising, with millions of workforce available in the province and viable graduates totaling 12,149 annually, as of 2013. 52.23% of which are from Metro Cavite, or roughly 6,345. Moreover, almost half of the covered area’s labor force are professionals. In which, 95 % of its absorptive workforce capacity are available for locators.

Figure 2: Graduates 2013 of Metro Cavite vs. Next Wave Cities

The highly qualified talent has contributed to the success of the BPO industry in Metro Cavite. Training programs, Teacher Training and Center of Development (COD) for IT Education for example, which are certified by CHED with Center of Excellence (COE), also help augment the talent with their intensive call center skill. Now, Metro Cavite has three major BPO companies, and there is still an oversupply of talent.

Figure 3: Minimum Wage 2014 of Metro Cavite vs. Next Wave Cities

Cavite Province’s terrain is characterized by rolling plot punctuated by hills where upland crops grow in abundance. Dasmarinas City is partly lowland and partly hill, while Imus and Bacoor City are almost composed of flat, formerly agricultural lands. Where most of lands are now being converted to develop properties. Nonetheless, Metro Cavite is outside the typhoon belt and has no fault line constraints. Thus, it is served by a natural drainage system since it passed through several rivers and water streams draining to the Manila Bay.

The province is adjacent to the country’s urban center and to the country’s international gateways. Having six major entry and exit points; going in and out of Cavite is easy. From the heart of Cavite, it is only 23 kilometers away from a major airport, or approximately a 60-minute drive, and 11 kilometers away from the Manila Port, or approximately a 90-minute drive. With good road network, moving from one town to another place is only a short distance drive.

Moreover, to provide an atmosphere conducive to business and a climate of optimism and buoyancy for investors, infrastructure advancement is continuous. Indeed, infrastructure developments are premeditated for convenient transportation, such as road widening and pavement projects. Public transportation also operates 24/7. Bus and jeepney terminals are located in common areas like malls, market and I.T. parks.

Cavite has strong telecommunication connectivity; DigiTel, PLDT and Innove (Globe Telecom) for telephones, while Smart Communications, Globe Telecom and Sun Cellular offer mobile services. On the other hand, power rate of Metro Cavite at par with Metro Laguna and Metro Bulacan is 8.69 per Kwh.

With the fast development progress of the province, peace and order is properly maintained through the Cavite-Philippine National Police program on increased police visibility. Meanwhile, industrial peace and productivity is regulated with the help of peaceful dialogues and regular meetings between the management and labor groups, which has been institutionalized.

The 6,677.2 km2 land area of Metro Cavite was delineated and allocated resourcefully, such as developing idle lands to PEZA sites. The local government has been very helpful in reaching the full potential of the province through addressing the lack of IT parks. From two IT parks in 2011- Robinsons Place Dasmarinas and SM City Bacoor, the metro now also has SM City Dasmarinas, DasmariñasTechnopark, FRC SuperMall, Imus and EMI Special Economic Zone. Further, 5,331 sq.m. office space of Suntech iPark first of five buildings will be available by 2015 while First Cavite Industrial Estate offers built-to-suit opportunities. 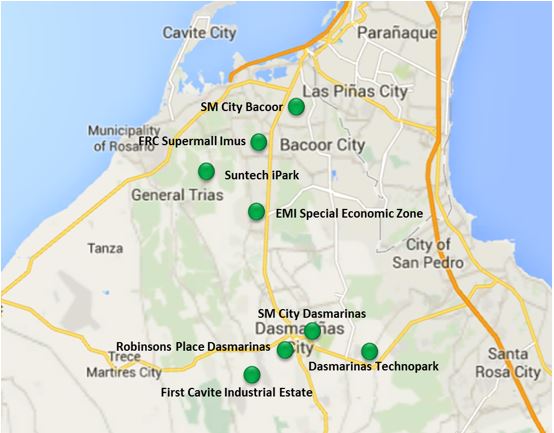 The investment climate has improved significantly since early 2011, due to the heightened investment incentives campaign by the government, such as PEZA incentives.

The contribution of the provincial government of Cavite to its continuous success is eminent. For a more comprehensive support, the local government has established its own Information and Communications Technology (ICT) council, the Cavite Information and Communications Technology Council (CICTC). The newly created council is a multi-stakeholder body which served as a point of contact for investors and stakeholders on all concerns about the local IT-BPO sector. They also participate in the national workshops and seminars conducted by Department of Science and Technology (DOST), which aimed to familiarize CICTC with global best practices for ease of doing business for emerging locators. Further, aside from PEZA incentives that locators can benefit from, the local government is open to additional incentives subject to the agreement between parties.

Generally, the processing of business permits and legal documents in the provincial government take two months or less.

With overwhelming graduates per year, Cavite’s talent contributed to the success to its first call center, operated in 2007. Currently, there are three major locators in Metro Cavite. With up to 1,200 agents, TaskUs is the second major locator to operate at Imus in 2009. While in 2011 Sutherlands Global Services opened their site, with 800 seats.  And recently, iQor operate its’ second facility in the country with more than 1,200 employees in 2013 at Dasmarinas.

The steady growth of company locators in the province is a healthy indicator of sustained business operations and a continuous pouring of investments over the years.

Metro Cavite is a mature community. The abundant talent and available infrastructure provide great opportunity to investors. The city was also included in the Department of Trade and Industry’s (DTI) top ten cities in view of its ideal business environment, infrastructure and human resources. Furthermore, its young professionals who worked with the top industries around the city. Cavite is a premiere business-friendly location that is waiting to achieve its full potential.