At the northern tip of Luzon, Ilocos Norte is seen as a progressive province, waiting for the opportunity to become an IT-BPO hub in the North. Through IN2020, Ilocos Norte is visualized to become a forefront in attaining inclusive growth. And one important milestone to look out is Metro Ilocos Norte.

Metro Ilocos Norte is comprised of Laoag City, San Nicolas, and Batac City. With a combined provincial population 609,588, 33.80% of them is situated in Metro Ilocos Norte, having a population of 111,651 in Laoag City, 38,895 in San Nicolas, and 55,484 in Batac City. Literacy rate is at 98%. Investors will enjoy the abundant supply of talent coupled with quality infrastructures and competitive business environment.

A total of 4,074 graduates comprise the talent pool of Metro Ilocos Norte. A famous institution is the Mariano Marcos State University wherein they produced a total of 2,604 graduates (64% of the total graduates in Metro Ilocos Norte), as of School Year 2012-2013. With abundant supply of talent in the area, there is a huge opportunity for quality manpower in the region, a rich source of talent that can provide productivity for the development and growth of the cities. With quality educational institutions producing graduates annually, BPO companies will find it easy to match job opportunities to employees.

Figure 2: Graduates 2013 of Metro Ilocos Norte vs. Next Wave Cities

Currimao Seaport is approximately 28 kilometers away from Laoag City Hall. The seaport plays a vital role as it serves as a transportation of domestic passengers and cargo vessels. Last May 2014, the NEDA Board confirmed the construction of the Laoag Bypass Link Road Project that will connect Laoag International Airport and Currimao Sea Port.

Supply of power is being acquired mainly through windmills and is being distributed by the Ilocos Norte Electric Cooperative. The average power rate of Metro Ilocos Norte in 2013 is still comparable to other next wave cities at P8.61 per kilowatt hour. Meanwhile, telecommunication infrastructures in Metro Ilocos Norte are equipped with Digital Fiber Optic Network to ensure fast and reliable communication. Currently, PLDT and Innove (Globe Telecom) are the internet providers while Globe, Smart, and Sun Cellular provide mobile phone services.

With a high supply of quality manpower, only two BPO companies have put up their site in Metro Ilocos Norte. Expert Global Solutions (EGS) recently put up their site in Gov Roque B. Ablan Street in Laoag City while Accenture is planning to put build their site in San Nicolas under Venvi Development Corporation. Both of them have initial seating capacity of 400 seats. Recent BPO investments are clear manifestations of a surging IT-BPO industry in the long-term. 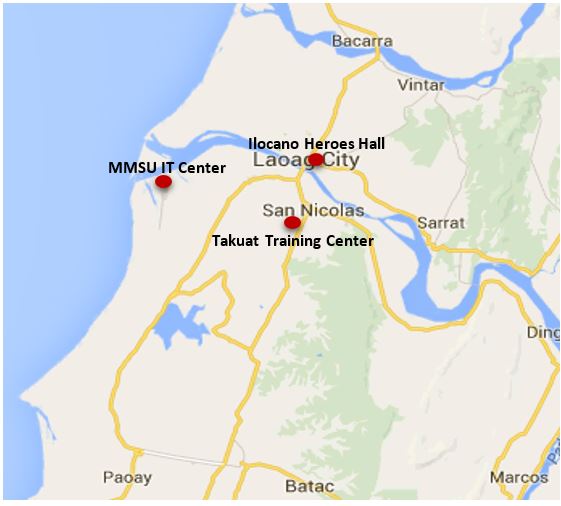 Under Provincial Ordinance No. 019-2014, amendment of New Ilocos Norte Investment Code was made possible for new and expanding enterprises to have fiscal and non-fiscal incentives that would attract investors for Metro Ilocos. For the fiscal incentives, a 35% exemption from the basic real property taxes will be given to all registered enterprises qualified under the Ilocos Norte Investment Code with a period of 3 years for investments ranging from P1.5 million to P3 million, 5 years for investments greater than P3 million to P15 million, 7 years exemption for investments above P15 million. In addition, for enterprise who is interested to invest more than P30 million will receive a 10% discount on the 35% provincial share from real property taxes for the succeeding 5 years from the date of expiration of full exemption.

Aside from the tax incentives, investors will also provide non-fiscal incentives. The province will provide a one-stop documentation for simplified documentation procedures, access to financial and technical assistance programs of the government, business linkages with local enterprises, selection and negotiation of right of way, identification of business location and factory sites. and assistance in securing of local permits and licenses, labor recruitment, securing direct source of electric power, water supply, communication and other public utilities, negotiation of special rates for industries with a minimum load of at least 1,000 kilowatt.

Metro Ilocos Norte is making its mark in the BPO industry. Notably known as the next investment haven of the North, Laoag City, San Nicolas, and Batac City will establish a sustainable business environment that will continue to prosper over time. With quality infrastructures being constructed and abundant supply of quality talents, BPO companies will find Metro Ilocos Norte a strategic place to invest.