Metro Laguna has evolved into a progressive city, aiming to be the next BPO hub of the South. Composed of Calamba City, Santa Rosa City, and Los Baños, Metro Laguna has instilled their fame in providing quality manpower for industries needing professional help. They have a combined population of 1,069,836 (2020)—50.44% in Calamba City, 10.78% in Los Baños, and 38.77% in Santa Rosa City. Local and foreign investors find the cities a conducive place to invest because of the abundant availability of manpower, bountiful PEZA sites to choose from, and its close proximity to nearby provinces like Cavite and Batangas.

Calamba City has the highest elevation with 106.07 meters, followed by Los Baños with 72 meters, and Santa Rosa City with 20 meters above sea level. The Valley Fault System already traversed Calamba in Barangays Canlubang, Mabato, and Bunggo. In Los Baños, there are two major geologic faults, namely, East Bay Fault crosses over Barangays Lalakay, Bambang, Timugan, Baybayin and Bayog. The other one, the Talim Fault, runs from Talim Island across the Bay.

Figure 1: Population of the Next Wave Cities 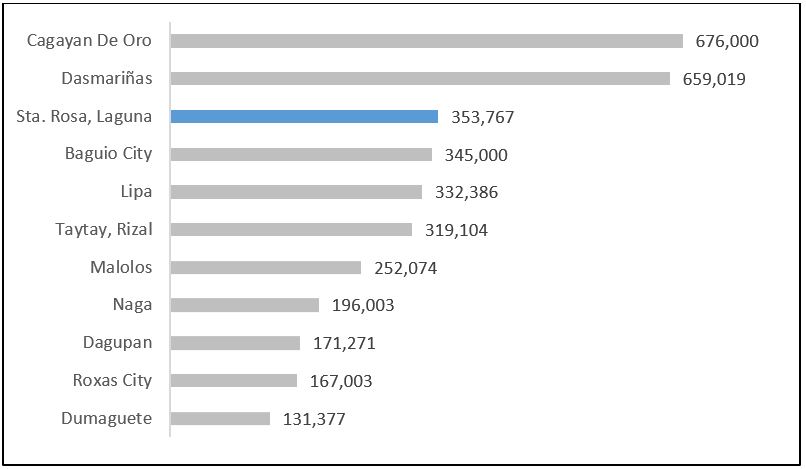 The supply of talent is abundant within Metro Laguna. As of School Year 2014-2015, the total graduates produced is 6,460 , of which 984 graduates came from Santa Rosa City, 2765 from Calamba City, and 2711 from Los Baños. Famous academic institutions like University of the Philippines-Lipa, San Sebastian College-Recoletos, and Philippine Women’s University have been known to supplement the growing demand in the services industry. Minimum wage, on the other hand, is set at P340.50 daily.

Figure 2: Graduates of Next Wave Cities 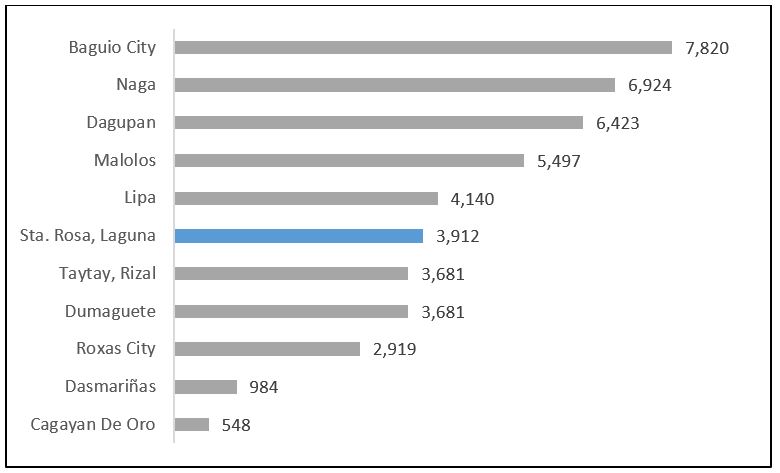 Figure 3: Minimum Wage Rates of the Next Wave Cities 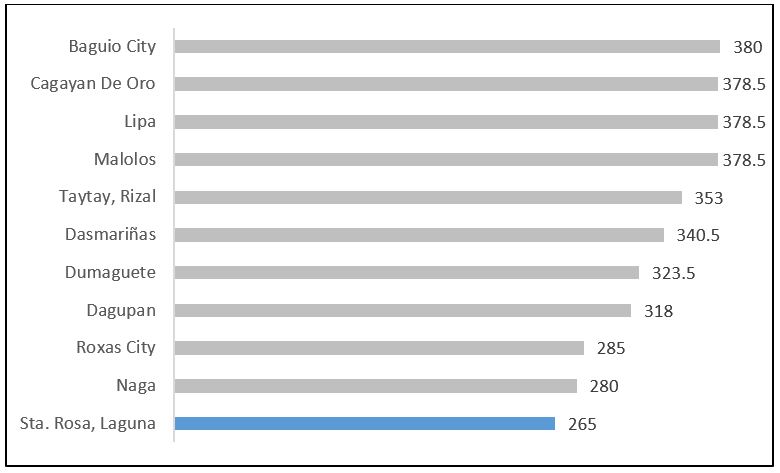 Convenience going in and out of the vicinity is major asset, not only in Metro Laguna, but also for the whole province. Infrastructures such as the Philippine National Railroad South line, South Luzon Expressway and Manila South Road, made Metro Laguna accessible to Metro Manila with less than an hour away. Mode of public transportation includes Busses, Vans, Jeepneys, and Tricycles. The nearest airport is Ninoy Aquino International Airport while the nearest seaports are Cavite and Batangas Ports.

For the list of available telecommunication companies, PLDT, Innove (Globe Telecom), and Digitel are the cities’ telephone providers while Globe Telecom, Smart Communications, and Sun Cellular are the cities’ mobile providers. For the power industry, Manila Electric Company (MERALCO) is the electric distributor in Metro Laguna. As of 2013, the average power rate is at P8.69 per kwh, the same rate with neighboring cities (Cavite and Batangas).

Six service providers offer local and international connection 24/7 in all parts of the Province.

Figure 4: Power Rates of Metro Laguna vs. other Next Wave Cities 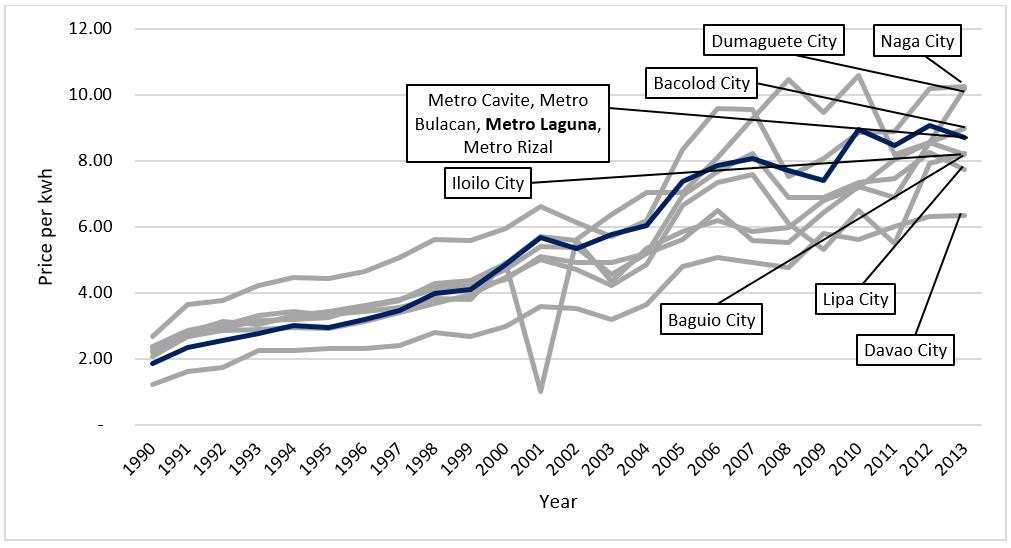 Developments in the Metro

Since the start of industrialization in the region, Metro Laguna has been consistently improving. Indicators of development such as the construction and expansion of malls, hospitals, and hotels, are likely to be seen because of the increase in economic activities and the number of tourists. Known hospitals are Southern Luzon Hospital and Medical Center (Santa Rosa City), Los Baños Doctors Hospital (Los Baños), Calamba Doctor’s Hospital (Calamba City) Sta. Rosa Hospital and Medical Center (Santa Rosa City), and Calamba Medical Center (Calamba City). 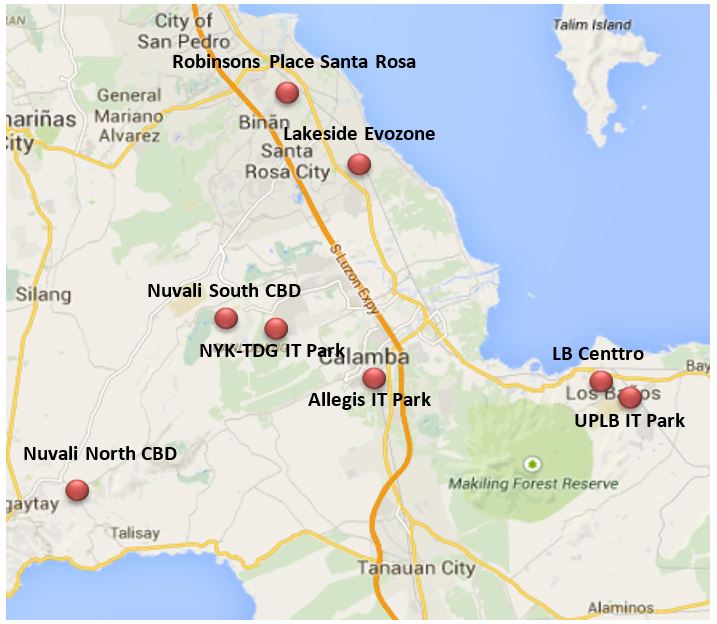 After series of economic upturns from the automotive and manufacturing industry in the 90s, Santa Rosa City has been dubbed as the “Investment Capital of South Luzon”. With more investors gaining market share in the city, IT-BPO companies has also been seen to generate income in the services industry. DOST and IBPAP included the Santa Rosa City as one of the Next Wave Cities because of the stable business environment with available talent pools.

PEZA IT Parks in Los Baños

PEZA IT Parks in Calamba City

Calamba City has been known to have various locators, being one of the known city for industrial, and manufacturing sector. IT-BPO sector has slowly been visible as PEZA IT Parks are being developed. Currently, there is one call center company located in Carmelray Park 2.

Three PEZA IT Parks are located in Calamba City (Allegis Information Technology Park, NYK-TDG IT Park, and Nuvali South Satellite CBD). The biggest is Nuvali South CBD with a total area of 21.82 hectares while the smallest is NYK-TDG IT Park with two hectares. Allegis IT Park stays in the middle with 5.71 hectares.

With Santa Rosa City, Calamba City and Los Baños gearing up in becoming a business district in the South, Metro Laguna has shown abundant available manpower, bountiful investment sites to choose from, and a grandeur of call centers in the BPO industry. From becoming a stable city climbing up to become an architect of business stature in the province of Laguna, Metro Laguna has proven its reputation in providing short- to long-term business opportunities.